From 30 November to 3 December, the partners of the European project TRIPS gathered online alongside European experts and representatives of the European Commission to exchange on the activities implementation and the first findings. TRIPS is co-funded by the European Union and aims at better identifying and responding to special needs of trafficked beneficiaries of international protection in their integration path.

Since January 2020, Forum réfugiés-Cosi and its European partners Churches’ Commission for Migrants in Europe (CCME), Immigrant Council of Ireland (ICI), Italian Council for Refugees (CIR), Organization for Aid to Refugees (OPU) have implemented the project TRIPS – identification of TRafficked beneficiairies of International Protection Special needs (include link to article describing the project). Project’s associate partners and European experts, the French Protection Office of Refugees and Stateless persons (OFPRA), the French Office of Immigration and Integration (OFII), the Group of Experts on Action against Trafficking in Human Beings (GRETA) and Amicale du Nid also participated and enriched the discussions thanks to their respective expertise and experience.

Despite the sanitary crisis and related difficulties to implement the activities, the partners have led an important research work and exchanges with a wide range of civil society actors, and European and national authorities on policies and practices related to integration of trafficked international protection beneficiaries. Each national partner has created a focus group including practitioners and institutions specialized in integration, human trafficking and international protection in order to identify good practices and challenges. These working groups succeeded in creating national dynamics and exchanges in integration and human trafficking and to provide inputs in research and analyze work of practices at national level. Partners have also identified victims of trafficking beneficiaries of international protection in order to organize interviews on their integration process and to better understand their support and referral needs. As European network, CCME has led three case studies in Austria, United-Kingdom and through an interview with the European office of the United Nations Refugee Agency.

This first phase of research concluded on the elaboration of a European comparative report which have been discussed during the mid-term workshop. Thanks to these results, partners and European experts have elaborated the first European recommendations of the project which will be presented in the final draft. Findings and recommendations were also presented and discussed with European Commission representative in charge of project monitoring, fight against human trafficking, and integration policies, but also with UNCR representatives, and European experts from civil society organizations namely International Centre for Migration Policy Development (ICMPD) and European Network of Migrant Women.

Finally, the mid-term workshop provided the opportunity to present the first draft of the TRIPS European toolbox which will reinforce the capacities of integration actors to identify and address trafficked international protection beneficiaries’ needs and favor coordination between supporting actors.

In 2021, national partners will adapt the toolbox to each national context to facilitate full adoption by a wide range of actors. Several training sessions will be organized at national level in order to disseminate these new tools and prepare a larger release. The end of the project and the final findings release are planned in December 2021. 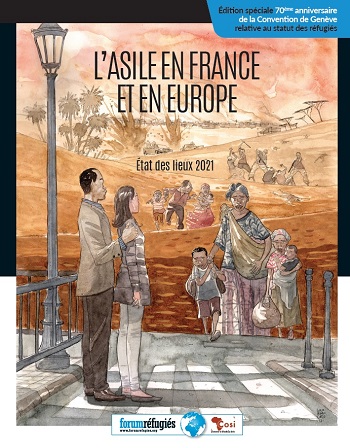